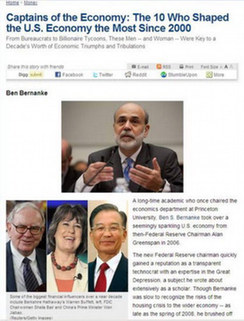 The American Broadcasting Company saidWen's influence was massive, despite the 67-year-old Chinese premier'sgeographical distance from the US。

The TV broadcaster said the big 10 are the people who have had the most impact on the world's largest economy since 2000.

ABC explained why it included Wen by saying: "Wen Jiabao, the premier of China, is driving a roaring engine."

"The world's most populous country is quickly rising to the top of the global economic heap, with a growth rate that has barely been touched by recession," the article said. "Infact, China recently overtook Germany to become the world'sthird-largest economy."

Chinese experts said yesterday thefact that Wen made the list was further proof of improved Sino-US ties.They said the US was acknowledging China's rise as an economic power,in part because it wanted to urge Beijing to compromise on issues,including currency and climate change。

The fact that Americans consumed somany Chinese products expedited the outflow of labor-intensiveindustries from the US and changed its industrial landscape, she said。

Beijing is now Washington's largest foreign creditor, holding $800 billion in US government bonds at the end of September。

"Washington has never been in such a dire need of Chinese funds," she said。

"It wants Beijing to not massively cutthe Treasury holding so the US has sufficient capital to continuedoling out the ailing financial sector," Fan said。

He Maochun, director of the ResearchCenter of Economy and Diplomacy at Tsinghua University, said Wen iswidely believed to be the driving force behind the $586-billionstimulus package launched by Beijing a year ago, which has helped keepChinese economy afloat during the global economic recession。

Wen's inclusion on the list was welcomed by many Chinese。