新东方在线0元免费畅学窗口
FINDING THE VALUE IN PERFUME 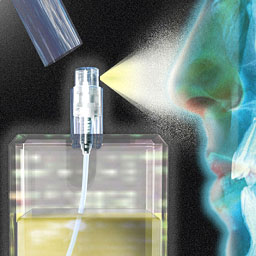 Buy a bottle of perfume and you could pay as much for its advertising as its contents. The Sceptical Shopper sniffs out some niche alternatives ...
From INTELLIGENT LIFE magazine, January/February 2012
Wearing scent is one of life’s pleasures. Humans have been dousing themselves in concoctions of olfactive molecules since at least the Bronze Age, and any habit that persistent has to have something going for it. Yet it does seem odd that most of the time we mask our own, genetically unique smell with others so widely available you can catch a whiff of them in cities across the planet: Opium on the streets of Barcelona, Eternity in Istanbul.
Heavily advertised, widely worn perfumes can smell good. But buy one and a fair proportion of your cash will go on its marketing, not on its contents. All those portentous, mini-movie perfume ads—filled with celebrity models running (presumably so they don’t have to spoil the effect by speaking) towards romantic assignations through increasingly rococo sets—don’t come anything close to cheap. Not only this, but such perfumes are vital money-makers for fashion brands, so they are almost without exception made to a price. When profit is put before pong, the results tend to be one-dimensional scents, made of cheap ingredients, that smell the same on everyone. Perhaps most irritating is that this instant recognisability is in fact a bonus for the big manufacturers. It turns you into a walking advert for their product—and unlike those celebrity models, you’re not getting paid.
Unfortunately, having a bespoke perfume made just for you will cost upwards of £600 for 100ml of eau de parfum (the most concentrated form of perfume), whereas a similar volume of a globally available brand typically costs £70. So it might be worth considering the middle ground—what you might call niche perfumes, which tend to cost anything from £80-£350 for 100ml. These are produced on a small scale, often by individual “noses” rather than existing fashion labels, have a negligible or non-existent advertising spend, and you won’t smell them wafting down every high street.
What, if any, is the actual difference? Most perfumes are a combination of top, middle and bass notes—scented ingredients ranked according to their volatility. Citrus smells, the commonest top notes, are highly volatile and disappear fast. Resinous base-note ingredients, such as myrrh or benzoin, last for many hours. Notes may be natural, or synthetic; the finest, hardest-to-harvest natural notes, such as aoud, or Grasse jasmine, can cost, ounce for ounce, more than gold. Don’t turn your nose up at synthetics, however: they can mimic existing smells that can’t be captured directly—lilac, for instance—or smell, literally, like nothing on earth.
Mass-market perfumes often nab you from the first sniff—they put all the bang into their top notes, because they want an instant sale. Niche perfumes are more complicated: like little stories in a bottle, their narrative unfolds throughout the day as the particular heat and microflora of your skin affect their layered ingredients. But you have to learn to love them. Without exception, of all the niche perfumes I tried for this article, it was those I at first disliked that most grew on me. When I first dabbed on Juliette Has a Gun’s Not a Perfume (£79/100ml), I was nonplussed. Six hours later I wanted to eat myself. E. Coudray’s Nohiba (£58/100ml)? Cloying and sweet when first on, wonderfully sexy after a few hours. Nez à Nez’s Atelier d’Artiste, £105/100ml? Hated it on the blotter, but loved it on my skin: so complex I felt like I was watching a film. I don’t know about you, but I’d rather watch a film than be an advert.