How About Better Parents 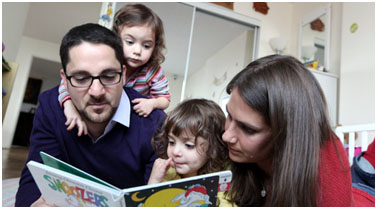 IN recent years, we’ve been treated to reams of op-ed articles about how we need better teachers in our public schools. There’s no question that a great teacher can make a huge difference in a student’s achievement. But here’s what some new studies are also showing: We need better parents. Parents more focused on their children’s education can also make a huge difference in a student’s achievement.
How do we know? Every three years, the Organization for Economic Cooperation and Development, or O.E.C.D., conducts exams as part of the Program for International Student Assessment（PISA）, which tests 15-year-olds in the world’s leading industrialized nations on their reading comprehension and ability to use what they’ve learned in math and science to solve real problems — the most important skills for succeeding in college and life.
To better understand why some students thrive taking the PISA tests and others do not, Andreas Schleicher, who oversees the exams for the O.E.C.D., was encouraged by the O.E.C.D. countries to look beyond the classrooms. So starting with four countries in 2006, and then adding 14 more in 2009, the PISA team went to the parents of 5,000 students and interviewed them “about how they raised their kids and then compared that with the test results” for each of those years. Two weeks ago, the PISA team published the three main findings of its study:
“Fifteen-year-old students whose parents often read books with them during their first year of primary school show markedly higher scores in PISA 2009 than students whose parents read with them infrequently or not at all. The performance advantage among students whose parents read to them in their early school years is evident regardless of the family’s socioeconomic background.
Schleicher explained to me that “just asking your child how was their school day and showing genuine interest in the learning that they are doing can have the same impact as hours of private tutoring. It is something every parent can do, no matter what their education level or social background.”
Yes, students from more well-to-do households are more likely to have more involved parents. “However,” the PISA team found, “even when comparing students of similar socioeconomic backgrounds, those students whose parents regularly read books to them when they were in the first year of primary school score 14 points higher, on average, than students whose parents did not.”
The kind of parental involvement matters, as well. “For example,” the PISA study noted, “on average, the score point difference in reading that is associated with parental involvement is largest when parents read a book with their child, when they talk about things they have done during the day, and when they tell stories to their children.” The score point difference is smallest when parental involvement takes the form of simply playing with their children.
Another study, called “Back to School: How parent involvement affects student achievement,” found something “somewhat surprising,” wrote Barth: “Parent involvement can take many forms, but only a few of them relate to higher student performance. Of those that work, parental actions that support children’s learning at home are most likely to have an impact on academic achievement at school.
“Monitoring homework; making sure children get to school; rewarding their efforts and talking up the idea of going to college. These parent actions are linked to better attendance, grades, test scores, and preparation for college,” Barth wrote. “The study found that getting parents involved with their children’s learning at home is a more powerful driver of achievement than parents attending P.T.A. and school board meetings, volunteering in classrooms, participating in fund-raising, and showing up at back-to-school nights.”
To be sure, there is no substitute for a good teacher. There is nothing more valuable than great classroom instruction. But let’s stop putting the whole burden on teachers. We also need better parents. Better parents can make every teacher more effective. （649 words）