Goodness has nothing to do with it 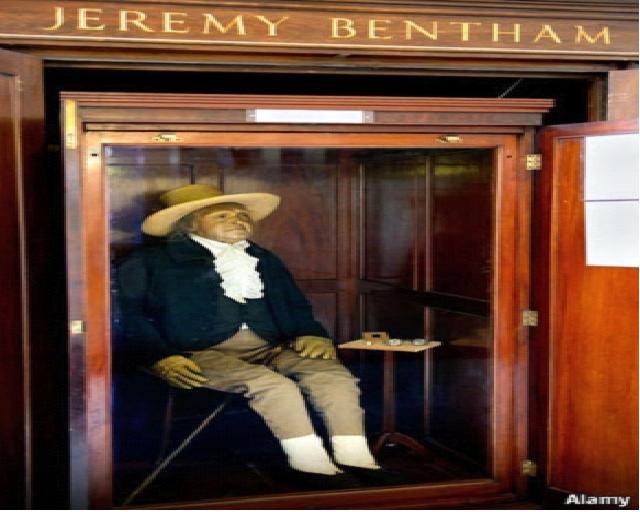 IN THE grand scheme of things Jeremy Bentham and John Stuart Mill are normally thought of as good guys. Between them, they came up with the ethical theory known as utilitarianism. The goal of this theory is encapsulated in Bentham’s aphorism that “the greatest happiness of the greatest number is the foundation of morals and legislation.”

Which all sounds fine and dandy until you start applying it to particular cases. A utilitarian, for example, might approve of the occasional torture of suspected terrorists—for the greater happiness of everyone else, you understand. That type of observation has led Daniel Bartels at Columbia University and David Pizarro at Cornell to ask what sort of people actually do have a utilitarian outlook on life. Their answers, just published in Cognition, are not comfortable.

One of the classic techniques used to measure a person’s willingness to behave in a utilitarian way is known as trolleyology. The subject of the study is challenged with thought experiments involving a runaway railway trolley or train carriage. All involve choices, each of which leads to people’s deaths. For example: there are five railway workmen in the path of a runaway carriage. The men will surely be killed unless the subject of the experiment, a bystander in the story, does something. The subject is told he is on a bridge over the tracks. Next to him is a big, heavy stranger. The subject is informed that his own body would be too light to stop the train, but that if he pushes the stranger onto the tracks, the stranger’s large body will stop the train and save the five lives. That, unfortunately, would kill the stranger.

Dr Bartels and Dr Pizarro knew from previous research that around 90% of people refuse the utilitarian act of killing one individual to save five. What no one had previously inquired about, though, was the nature of the remaining 10%.

To find out, the two researchers gave 208 undergraduates a battery of trolleyological tests and measured, on a four-point scale, how utilitarian their responses were. Participants were also asked to respond to a series of statements intended to get a sense of their individual psychologies. These statements included, “I like to see fist fights”, “The best way to handle people is to tell them what they want to hear”, and “When you really think about it, life is not worth the effort of getting up in the morning”.
Each was asked to indicate, for each statement, where his views lay on a continuum that had “strongly agree” at one end and “strongly disagree” at the other. These statements, and others like them, were designed to measure, respectively, psychopathy, Machiavellianism and a person’s sense of how meaningful life is.

Dr Bartels and Dr Pizarro then correlated the results from the trolleyology with those from the personality tests. They found a strong link between utilitarian answers to moral dilemmas (push the fat guy off the bridge) and personalities that were psychopathic, Machiavellian or tended to view life as meaningless. Utilitarians, this suggests, may add to the sum of human happiness, but they are not very happy people themselves.

That does not make utilitarianism wrong. Crafting legislation—one of the main things that Bentham and Mill wanted to improve—inevitably involves riding roughshod over someone’s interests. Utilitarianism provides a plausible framework for deciding who should get trampled. The results obtained by Dr Bartels and Dr Pizarro do, though, raise questions about the type of people who you want making the laws. Psychopathic, Machiavellian misanthropes? Apparently, yes.