Everyone Should Go to College 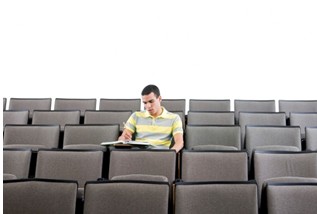 About half of all young Americans now start at two- or four-year colleges. Is this too many? About a third of the population winds up with at least a bachelor’s degree. Too many as well? Charles Murray of the American Enterprise Institute thinks so, and he’s far from alone. College work, Murray argues, “is intellectually too demanding for most young people,” and thus enrollment should be capped at 10 percent, the 1940 level.

I beg to differ. Everyone has the capacity to succeed at college and benefit from what it has to offer. I leave to others whether more degrees will create a globally competitive workforce, so we can stand down the Chinese. Nor am I impressed that bachelor"s holders average $58,613 versus $31,283 for high-school graduates. My reasons, rather, are intellectual, aesthetic, even ethical.

Things happen at college, whether you major in medieval philosophy or fashion merchandising. Since attendance is voluntary (and should remain that way), passing tests and turning in assignments show a willingness to do things you may not like, as an investment in your future. The campus experience also leads to you seeing yourself in modern terms. Graduates tend to be more open-minded, not due to liberal professors, but because they know they’ve chosen a new kind of life.

I have been teaching for longer than I care to say, and always offer a course for entering freshmen. Moreover, I am at a public college, whose students lack the scores and records usually demanded by more selective schools. And I’ve discovered something quite elemental: all young people have knowledge-thirsty minds that can be awakened and encouraged to examine the world they inhabit.

So why do we hear so many professors describe their pupils as hostile to learning, with a leavening of indolence? (Not to mention tales of cheating, purchased papers, and Internet surfing during class.) I’ll stipulate the obvious: colleges want good students. But by that, they generally mean high SATs and GPAs. Students who get 700s and 3.8s show they’ve agreed to perform by the academic book, giving answers their elders expect. Sadly, this expectation continues at college where, as Harvard’s Harvey Mansfield states, professors believe “that what they’re doing research on is exactly what students need to know.” Sophomores aren’t doctoral candidates eager to master esoteric disciplines—yet what occurs in most college classrooms now centers on the interests of professors rather than stimulating the minds of undergraduates.

How best to get more students into college and get them thinking? A start would be to abandon the constrictions of academic fields. I know of a class where a professor invites the students to ponder human nature. He cites Alexander Hamilton, who wrote that human beings are “ambitious, vindictive, and rapacious.” And then Thomas Jefferson, who held that “morality, compassion, and generosity are innate elements in the human constitution.” This is a discussion worthy of a college course, in which every one of us can bring information and insights to the analysis. This can also happen in the sciences. Thus there’s a geology course that starts with the professor saying, “After this semester, you’ll never look at a rock in the same way again.” Of course, the students are expected to put in a lot of hard work. But teachers like that make them willing to do it. (And they’re less likely to cheat or surf when they respect their professors.)

We may not all think the same way, but everyone has the aptitudes, innate and cultivated, needed for college-level learning. The very freshmen currently binging on fraternity row could be delivering a seminar paper on Lady Macbeth—the onus is on teachers. Stirring students is their job.

A friend who teaches at a local college once told me she is often asked by friends, “Are your students any good?”

Her reply: "We make them good."