Thirty years of a disease

The end of AIDS? 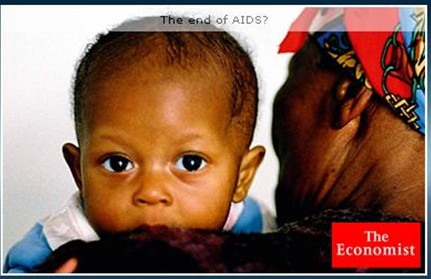 ON JUNE 5th 1981 America’s Centres for Disease Control and Prevention reported the outbreak of an unusual form of pneumonia in Los Angeles. When, a few weeks later, its scientists noticed a similar cluster of a rare cancer called Kaposi’s sarcoma in San Francisco, they suspected that something strange and serious was afoot. That something was AIDS.

Since then, 25m people have died from AIDS and another 34m are infected. The 30th anniversary of the disease’s discovery has been taken by many as an occasion for hand-wringing. Yet the war on AIDS is going far better than anyone dared hope.

Even more hopeful is a recent study which suggests that the drugs used to treat AIDS may also stop its transmission. If that proves true, the drugs could achieve much of what a vaccine would. The question for the world will no longer be whether it can wipe out the plague, but whether it is prepared to pay the price.

If AIDS is defeated, it will be thanks to an alliance of science, activism and altruism. The science has come from the world’s pharmaceutical companies. In 1996 a batch of similar drugs, all of them inhibiting the activity of one of the AIDS virus’s crucial enzymes, appeared almost simultaneously. The effect was miraculous, if you (or your government) could afford the $15,000 a year that those drugs cost when they first came on the market.

Much of the activism came from rich-world gays. Having badgered drug companies into creating the new medicines, the activists bullied them into dropping the price.

The altruism was aroused as it became clear by the mid-1990s that AIDS was not just a rich-world disease. Three-quarters of those affected were—and still are—in Africa. Unlike most infections, which strike children and the elderly, AIDS hits the most productive members of society: businessmen, civil servants, engineers, teachers, doctors, nurses. Thanks to an enormous effort by Western philanthropists and some politicians (this is one area where even the left should give credit to George Bush junior), a series of programmes has brought drugs to those infected.

The result is patchy. Not enough people—some 6.6m of the 16m who would most quickly benefit—are getting the drugs. And the pills are not a cure. Stop taking them, and the virus bounces back. But it is a huge step forward from ten years ago.

What can science offer now? A few people’s immune systems control the disease naturally and antibodies have been discovered that neutralise the virus. But a cure still seems a long way off. Prevention is, for the moment, the better bet.

In the early days scientists were often attacked by activists for being more concerned with trying to prevent the epidemic spreading than treating the affected. Now it seems that treatment and prevention will come in the same pill. If you can stop the virus reproducing in someone’s body, you not only save his life, you also reduce the number of viruses for him to pass on. Get enough people on drugs and it would be like vaccinating them: the chain of transmission would be broken.

Such a programme would take years and also cost a lot of money. About $16 billion a year is spent on AIDS in poor and middle-income countries. Half is generated locally and half is foreign aid. Moreover, most of the extra spending would be offset by savings on the treatment of those who would have been infected, but were not—some 12m people, if the boffins have done their sums right. At $500 per person per year, the benefits would far outweigh the costs in purely economic terms; though donors will need to compare the gain from spending more on knocking out AIDS against other worthy causes, such as eliminating malaria.

For the moment, the struggle is to stop some rich countries giving less. It is still a long haul. But AIDS can be beaten. A plague that 30 years ago was blamed on man’s iniquity has ended up showing him in a better, more inventive and generous light.